On Saturday, September 21, over one hundred  Annhurst College Alumni attended their annual reunion  at the former Annhurst College Student Center that is now owned by the Woodstock Academy.

Attending the reunion were grads from 1947 (94 year old Edna Cassolini) to 1980, the year the college closed. Also in  attendance were several Daughters of the Holy Spirit who owned and administered the College and also served as professors and in other areas. Also present was Theresa O’Neill, former chair of the Education Department and Marguerite Janelle of the Philosophy Department.

Mary LaChance, coordinator of the event and a 1979 graduate, was pleased and excited by the large turnout with alumni traveling in from as far as Texas.

Besides laughter and unlimited conversations, the alumni also enjoyed purchasing Annhurst memorabilia items and sweatshirts for themselves and Annie U onesies for the grand or grand grand kids. A 20 basket raffle was also held to generate  funds for the Association and to add to the festivities.

After a delightful lunch catered by the Filk Company, there were tours of the campus guided by students at the Woodstock Academy. Alumni were grateful to note that while many changes have occurred on the campus since 1980, most of them reflect the original spirit of the campus including a building named Annhurst Hall.

This event was indeed a day to remember and for which to be grateful. We look forward to returning to the Woodstock Academy campus in 2020 on Saturday, September 15, the third Saturday in September. 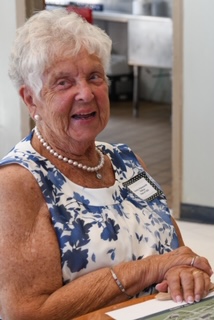 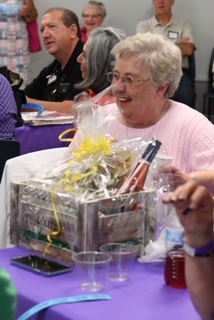