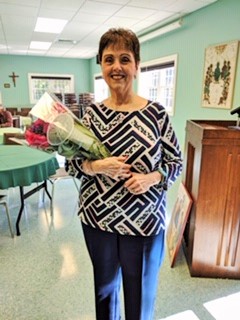 Sponsored by the Associates of the Daughters of the Holy Spirit, a large group of Sisters, Associates and friends gathered at the DHS Administrative Offices on a sunny September 21 to hear the emotion-filled story of Putnam native, Dee Carnahan, a survivor of the 9/11 attack on the Pentagon.

Dee was an employee of the U.S. government, attached to one of the 4 Star Naval Generals and had worked there many years.  She shared how she had always felt safe in that huge facility … until that day.

She recalled how that fate full day had started as usual when the report of the attacks in New York and the threat to the Pentagon came through. Dee’s offices and those of other workers were scheduled to be moved soon, and some workers, and friends of Dee, had already been moved to the new area …the very area where the plane came crashing down so close to her.  She was in shock as a young sailor helped her out, but her worry was about her friends. Later, one of them told how she actually saw the plane approaching and was puzzled as to why it was so low. Dee continued that while she was still dazed, she was trying to find her husband who worked in a different building. When they finally found each other, she didn’t even recognize him, being so filled with disbelief, anxiety and fear.

Carnahan further added that she continues to have emotional issues from her experience and when she was first asked to share her story publicly, she wasn’t sure she could; but she did and has done so many times since.
As hard as it is to relive those days and that terrifying moment, there is some comfort to be found each time she retells the event and, for those of us who listened attentively on this God-given day, her telling of her own story helped all of us who had only heard news reports and seen pictures have a truer understanding of the horror from one who lived it personally.  We can only pray that our merciful God will heal our hearts and our souls as we hold all innocent victims of such violence in prayer and close to our hearts.  We remember, we are compassionate and we cry work for justice and peace.

The sharing continued long after the presentation and we all returned home with renewed admiration of innocent victims everywhere…victims who all have a story to tell and to share.  Thank you, Dee, for sharing with us.