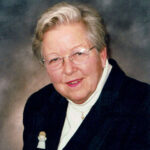 Early on the morning of October 1st, Mary MacDonald said her final “yes” to her Lord’s call to enter life eternal and reap the fruits of her many good works.

Mary was born and raised in Hartsdale, New York the daughter of the late May and Joe MacDonald on October 4, 1933.

Ms. MacDonald attended Good Counsel High School and a few years after graduation entered the Congregation of Divine Compassion in 1951. After profession she was missioned to work in the teaching field and dedicated 28 years to the classroom and administration positions in schools that served families and children who were on the margins of society.

In 1969 Mary, a gifted math teacher, took a position at Rye Country Day School. She remained there until her retirement in 1989.

Over the course of those years Mary was able to renew her long standing friendship with the Daughters of the Holy Spirit whom she had met while studying at Annhurst College. These renewed ties were strenghened by Mary’s many visits to Putnam, which led her to become interested in the newly formed Associate program. Mary and four other women entered the formation program for the Associate members and in 1988 Mary and two of her companiobns, Dr. Diane Summa and Ms. Yvonne Despathy, pronounced their covenanta as the first Associaates in the entire Congregation.
She contributed to the growth of the group and spent several years as co director.

Because of failing health Mary moved to an Assisted living center in her beloved seconf home of Bristol, Rhode Island. Shortly thereafter, her condition continued to decline and she transferred to a Nursing Home also in Bristol.

Mary touched the lives of so many over the years. She loved her family , her DHS Family, her work and doing good wherever she went, something that came naturally to Mary. She believed she had been blessed in a special way by her God and was bound and determined to share and bring those blessings to all she met, Her lige will forever be an example to all who have known her. May she rest in her God’s generous love and peace.

Mary’s life will be celebrated at St. Mary’s Church in Bristol, RI on Wednesday, October 13th at 9:30 am. The Mass will begin at 11:00 and burial will be in the family plot in Pawtucket, RI. and will be private. Memorial gifts may be sent to the DAUGHTERS OF THE hOLY SPIRIT Associate Program at PO Box 497 Putnam, CT 06260 or to St. Mary Church 330 Wood St. in Bristol, RI 02809.

THANKS, NARY, AS YOU CONTINUE TO BLESS AND INSPIRE US!